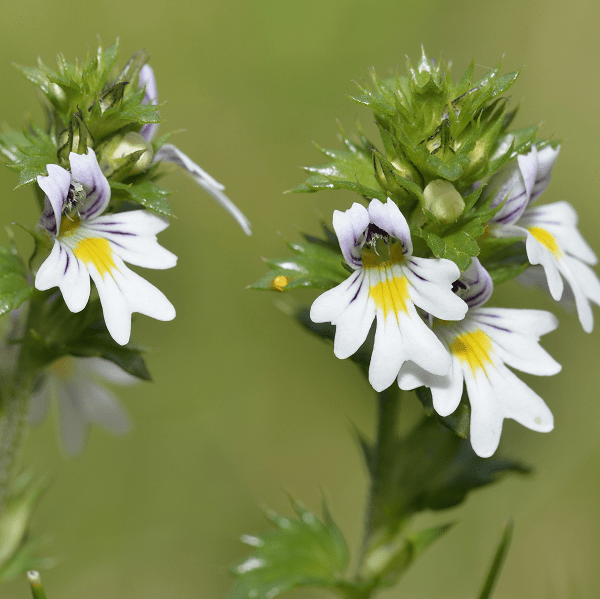 There are scores of homeopathic remedies for hay fever. Whether your eyes become sore, streaming puffy messes at the faintest hint of pollen, or your nose runs like a tap, or you could itch for England, you can significantly relieve your symptoms with well-chosen remedies. The secret is to find the one that fits for your symptoms. Forget over-the-counter homeopathic remedies for hayfever (which throw in half a dozen and hope for the best that one in there is going to work for you) – it’s way more effective to find specific remedies for your specific symptoms.

Arundo: burning and itching in ears and roof of the mouth, then can go on to include conjunctivitis. With sneezing and itchy nose.

Euphrasia (pictured): centres on the eyes, which stream with burning tears leaving them sore, red and sensitive.

Succinum: Extreme itchiness. Lots of sneezing, and the whole respiratory tract is irritated and inflamed.

Wyethia: the textbook hayfever remedy – try if none of the others seem to match your symptoms.

They are best taken in the 30c potency, as you need them – which can be at half-hour intervals (maximum six doses daily) if you’re really suffering. It’s fine to take several different remedies, alternating them according to your symptoms at the time. These homeopathic remedies for hay fever are available for £7.50 each at The Hub.

Note, though, that these will not cure your hay fever, they’ll merely manage – and hopefully dramatically improve – the symptoms. To get full treatment, and possibly get rid of your hay fever altogether, you need to see a qualified homeopath.

Click here to book an appointment with The Hub’s homeopath, Sue

Hay fever sufferers, beware: spring is coming early!
Euphrasia, panacea for hayfever eyes
Posted in Hay fever
← Videos explain what homeopathy is and how it worksOverloaded with stress? →