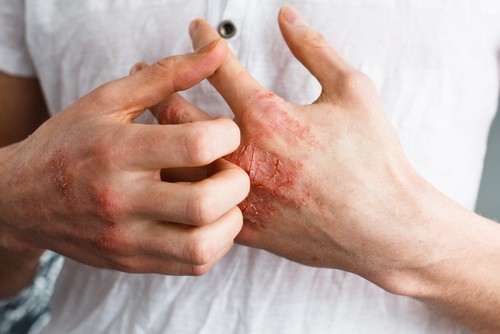 A growing amount of evidence shows that skin conditions such as eczema (atopic dermatitis) and psoriasis can be linked to an imbalance of good and bad bacteria in the gut. So if you are prone to eczema or you have a family tendency to eczema we would strongly urge that you supplement your diet with good-quality probiotics. The studies suggest that Lactobacillus rhamnosus is the best strain of friendly bacteria to exert a protective effect against the development of atopic eczema.

The evidence that probiotics prevent eczema

The results revealed that, among the 425 participants, the incidence of eczema in the probiotic group was half that of the placebo group (23% versus 46%) at four years old (two years after finishing taking the supplements). When the researchers checked in again on the children at the age of seven the risk of developing eczema was still significantly diminished in the group who had taken Lactobacillus rhamnosus.

How probiotics protect you from eczema

It is now commonly understood that the bacteria in our gut has an important influence on our immune system. When the balance of ‘good’ and ‘bad’ microbes is lost and the levels of unhealthy bacteria take over in the gut, these bad strains can then damage the lining of the gastro-intestinal tract. Not only does this allow pathogens and toxins to reach the bloodstream but the damage to the gut mucosa (normally a protective barrier) also triggers an inflammatory reaction from the immune system. The continuous cycle of damage to the gut lining and the resultant low-grade inflammation through the body can have far-reaching consequences in the body – one of which is eczema.

The introduction of probiotics into a gut that’s over-populated by the bad guys increases the competition for space on the gut wall, and also competition for available food and nutrients. In this way probiotics can effectively ‘crowd out’ less desirable strains of bacteria and help to restore the gut flora to its natural balance, giving the epithelial lining a chance to heal. If the gut lining regains its integrity and becomes less ‘leaky’ then a significant burden is taken off the immune system, meaning that it is less likely to ‘over-react’ thus reducing our susceptibility to allergies. Researchers have found probiotics slow down production of cytokines, the ‘messenger’ molecules that alert the body to infection and trigger inflammation.

It is believed, therefore, that probiotics work by protecting the gut wall, and so normalising eczema sufferers’ immune systems and reducing inflammation throughout the body.

Probiotics offer an alternative to steroids

When eczema is severe it can be due to a genetic weakness that means skin is lacking in a protein, fillaggrin, which is an important component of our skin barrier to infections. This makes these people’s skin more susceptible to forming an unhealthy ‘biofilm’, caused by harmful bacteria that block sweat ducts and cover the skin causing an immune response and therefore itching.

But a recent study, led by Eva Berkes, chief scientific officer for Quorum Innovations in Florida, found that a live culture extract applied to skin could protect it against these pathogenic biofilms. In fact, this treatment increased the levels of filaggrin protein twofold compared to the untreated skin.

The future could, therefore, offer a probiotic alternative to topical steroids.

We stock Optibac For Every Day, which contains the strain of probiotic, Lactobacillus rhamnosus, used in the mother & baby study that showed it can halve your baby’s likelihood of developing eczema