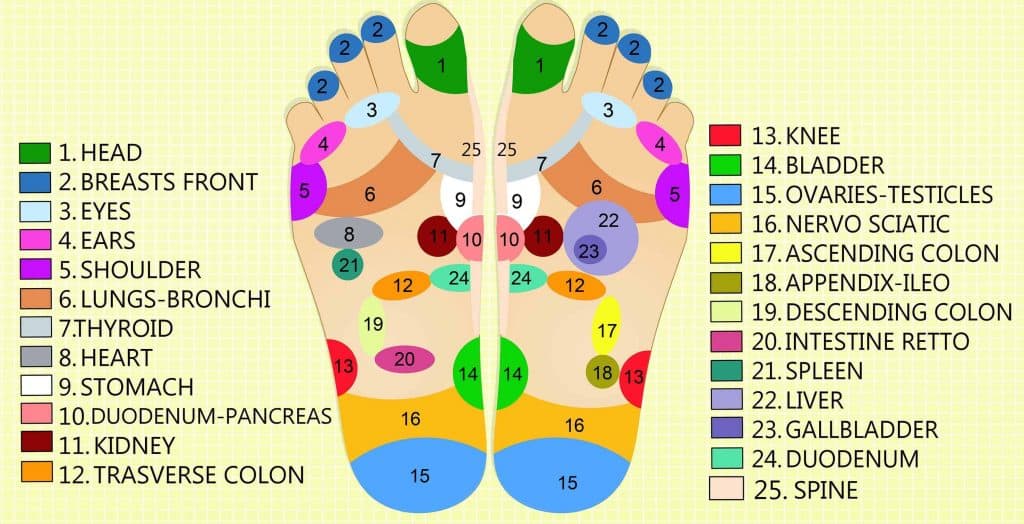 People always come out totally chilled out after reflexology with Tracey or Rhi. Clearly one of the most relaxing therapies we offer at The Hub, it’s actually a whole lot more than just foot massage… Check out on the reflexology chart where areas of the body correspond to areas of the feet and you can soon appreciate how reflexology operates: the therapist can feel on your foot where your body is out of balance and the art of the reflexologist is to restore everywhere to its harmonic state.

I’ll never forget the first time I had reflexology. I was pregnant and having trouble sleeping because my bump was stopping me lying in my favoured sleep position: on my tum. When the reflexologist got to a certain point on one of one of my feet my daughter did a somersault inside me! From then on I was a convert.

While the art of reflexology dates back to ancient Egypt, India and China, this therapy was not introduced to the West until Dr William Fitzgerald developed ‘zone therapy’. He believed that reflex areas on the feet and hands were linked to other areas and organs of the body within the same zone. In the 1930s Eunice Ingham further developed this zone theory into what is now known as reflexology, working on the principle that congestion or tension in any part of the foot is mirrored in the corresponding part of the body.

What does it do?

Reflexology foot massages release tension and stress. Not only do they help increase blood circulation, release toxins, reduce pain and induce a deep state of relaxation, they also unblock stagnant energy build-up – which in eastern medicine is believed to be the root cause of ill health.

Reflexology with Tracey-Lee Glasspool or Rhi Hepple costs £45 for a one-hour appointment. To book click here